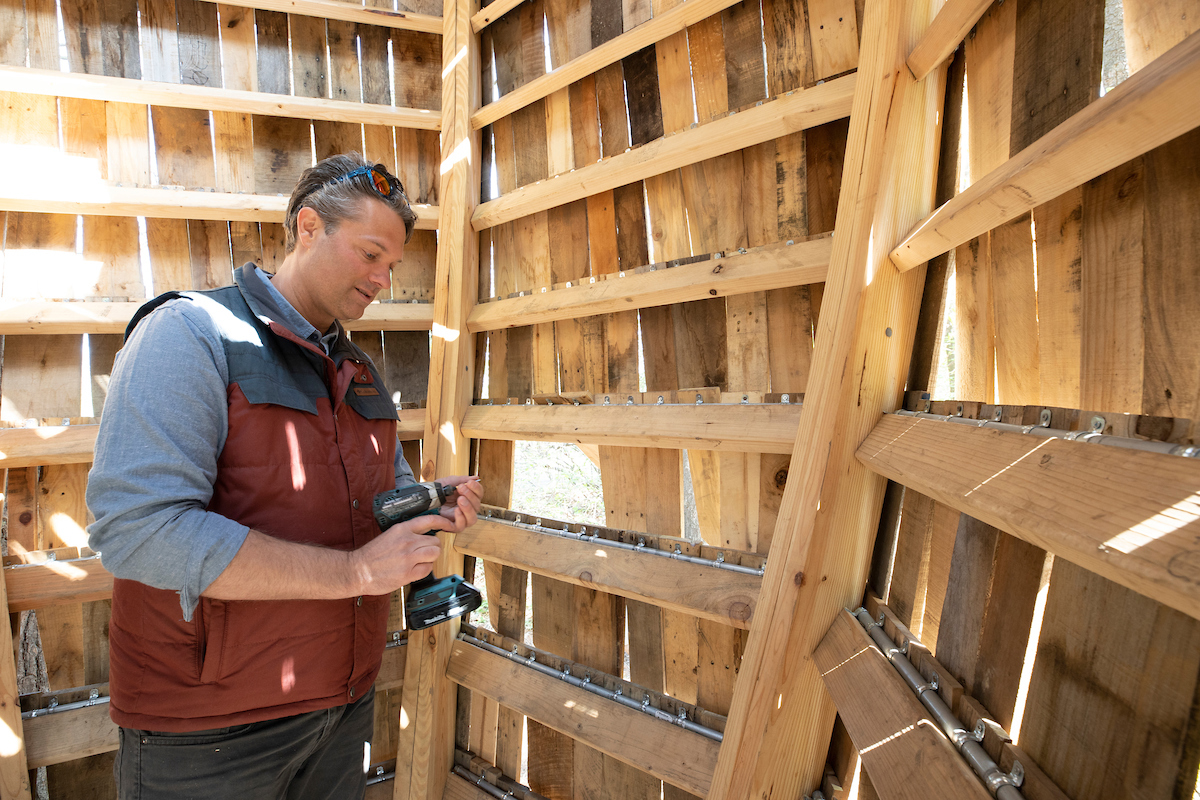 Joel Armor, a visiting assistant professor of Art and Arts Management & Arts Entrepreneurship at Miami University, received a project award from the Cincinnati Nature Center in the fall 2021 for its inaugural artist series, Earth Expressions.

The resulting sculpture, Finding Home, is inspired by the Norway spruce found within the center’s Nature PlayScape area. It relies on the adjoining tree as integral structural support, a seemingly natural occurrence in which the two appear to be growing together in a symbiotic state and speaks to the relationship of nature and human intervention.

All ages are invited to enter the pinecone-like structure through the opening of its base. The overlapping scales are set on individual pivots, allowing each one to independently open and close as a gesture of biomimicry. A hexagonal skylight seen from the interior serves as a focal point to the giant conifer to emphasize its awe-inspiring scale relative to the viewer. 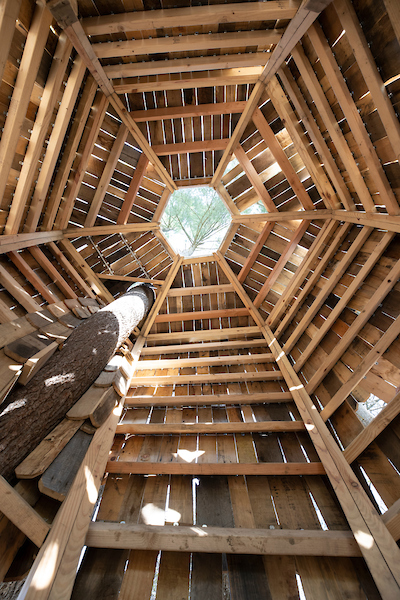 Finding Home is now on display at the nature center, located in Milford.  It initially was scheduled to be on display for two months but has since been extended with an undetermined, and possible, permanent installation timeline. The work was supported by ArtsWave’s Catalyzing Impact Grant and Bonded Pallets of Cincinnati.

“The project is made from sustainable materials that coincide with the values of both the nature center and my own,” Armor said. “When choosing the final materials, it was vital for me to use natural and sustainably accessible materials, especially in the instance of repurposing the preexisting pallet boards in an innovative way.”

With more than 300,000 visitors annually to the nature center, Armor’s work is estimated to be viewed by 25,000 visitors each month it is on display. 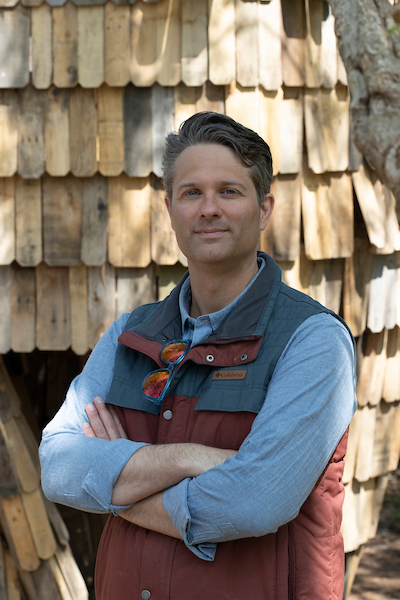 Armor developed a lecture, The Process of Finding Home, that demonstrates how he utilized the Design Thinking model, which details the process from ideation to creation of the work. He incorporated the presentation into his courses to discuss relative topics such as Design Thinking, innovation, the use of an RFP model, collaboration, professional practices, and entrepreneurship.

Todd Stuart, the director of Arts Management & Arts Entrepreneurship, said Armor is a great role model for students. “As both an artist and arts entrepreneur running his arts consulting business,  he exemplifies the multidisciplinary skillset needed for working in arts in the 21st century,” Stuart said.

Armor serves as a liaison between the Art Department and the Arts Management and Arts Entrepreneurship Program at Miami. As an artist, educator, and facilitator, he views his roles as deeply interconnected in that each profoundly informs the other.

Armor holds a Master of Fine Arts degree in Sculpture from the University of Cincinnati. His student-centered classrooms reveal his passion to teach which embodies a symbiotic relationship between instructor and learner.

Watch a video about the process here.